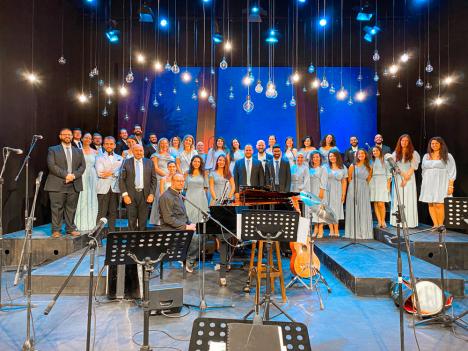 Muntaser Dawwas: We continue to shine a spotlight on remarkable Jordanian talents

INVESTBANK, the leader in providing innovative financial solutions, was the golden sponsor of Mosaica’s ‘A Thrill of Hope’ concert, which took place at the OES Culture and Sports Building Theater - The Orthodox Educational Society from December 9 through to December 12, 2021. The bank’s sponsorship is in line with its avid support of the arts and culture, with a focus on offering its backing to local talents as a way of shining the spotlight on the varied artistic abilities that can be found in the country’s communities as well as offering people more access to cultural events.

Mosaica returned to the stage after a two-year hiatus with a concert in an atmosphere replete with the warm ambience of the Christmas season, offering a set list full of the band’s unique take on classical Arabic songs and music.

Speaking about the sponsorship, INVESTBANK CEO Muntaser Dawwas said that the bank works hard to maintain a strong presence in the community through arts and culture offerings, including exceptional artistic performances and concerts that play a large part in contributing to the preservation of ancient Arab and Jordanian lyrical heritages using a contemporary approach that appeals to a younger generation. Dawwas went on to add that INVESTBANK’s golden sponsorship of the concert by Mosaica Singers, which won the Best Choir Award for 2019 at the Middle East Choir Festival, is in line with its consistent efforts to support talented Jordanians while simultaneously instilling a love of music within the community.

According to Mosaica Singers Co-founder and Musical Director Nedy Muna, the group was excited to return to the stage after a two-year absence due to the coronavirus pandemic and the government’s guidelines to curb its spread, adding that INVESTBANK’s support over the past six years was instrumental in the group’s continued ability to put on live performances.

Established in 2019 by a group of Jordanian artists and musicians, Mosaica aims to employ music as a tool to build a common understanding and enrich people's lives through the power of music that unites all ages, cultures, and social and professional backgrounds, to establish a diverse aesthetic art formation such as mosaic, hence its name. "Mosaic" by adding the words "mosaic" and "music" into one.