Is to partner with our clients in their success by providing innovative products, exceptional service and customized advice through our empowered employees, guided by our vision and values. 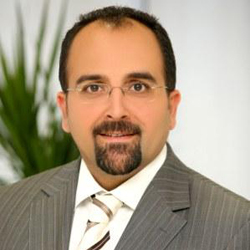 As Chief Executive Officer of INVESTBANK, Muntaser Dawwas joined the bank in full force with a proven track record of extensive banking experience from the Far East and Middle East regions. Before taking this milestone move, Muntaser was the Global Head of Consumer Banking at the Arab Bank where over 400 distribution branches were under his management. Prior to this, he was based in Singapore as Group Chief Marketing Officer for Standard Chartered Bank (SCB); overlooking 59 countries. Formerly at SCB, Muntaser was based in Bahrain as Regional Head of Consumer Banking (Northern Gulf & Levant) where his geographic responsibility included Bahrain, Qatar, Jordan and Lebanon. Earlier to this post, he was based in Jordan with SCB as Head of Consumer Banking. Muntaser's career started at Citibank, based in Jordan, as the Financial Controller for Jordan, Palestine, East Jerusalem, Iraq and Syria. Muntaser is married with three children. He received his B.Sc. in Accounting and Financial Management at the University of Buckingham, United Kingdom and his CPA from the United States. 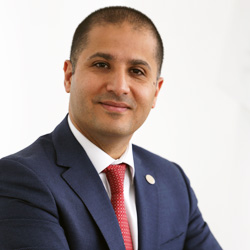 Ramzi Darwish joined INVESTBANK in 2007 as Assistant General Manager heading the Corporate Banking Division ; before he joined INVESTBANK, Ramzi served as Head of Corporate Banking at the Egyptian Arab Land Bank and as a Banking Relationship Executive at HSBC. Ramzi's career includes leadership roles at the Arab National Bank, the Arab Bank and Cairo Amman Bank. During his 16 years of financial services experience, Ramzi became a member in the Board of Directors of several prestigious financial intuitions: Quds Bank, Real Estate Development Company (REDV) and Quds Real Estate Company. Ramzi received his MBA in Finance & Investments from the George Washington University 1995 in which he was presented with the "Excellence of Service" Certificate and his B.Sc. in Economics & Statistics from the University of Jordan 1993. 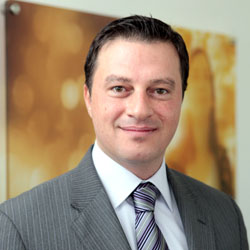 Muhannad Boka joined INVETSBANK in May 2012.He assumed the role of Assistant General Manager, Commercial Banking Division, a newly established Department, created to address and customize the banking services and Solutions for the Commercial Enterprises in Jordan. Shortly afterwards, he was assigned to look over the SME Division in addition to his existing responsibilities. In 2009, Muhannad was appointed as the Head of Global Payments & Cash Management Division at HSBC Jordan. After which he was selected to lead the Business Banking segment for both Jordan and Ramallah, and later to Co-Head the Corporate Bank at the same bank. He started his banking career at Wells Fargo Bank in the USA, and moved up the ranks within the organization to become an Assistant Vice President at California Business Banking Group. He also served as an Assistant Vice President in multiple roles at Wachovia Bank and Washington Mutual bank in the US. Mr .Boka holds a BA degree in Economics from Applied Science University – Jordan. 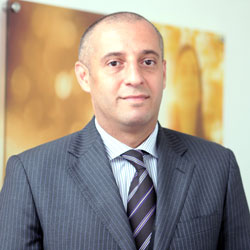 Tareq Sakkijha joined INVETSBANK in 2011 and currently holds the position of the Assistant General Manager - Head of Retail Banking. He has a total of 14 years of working experience in Retail Banking, Products Management and Consumer Services of which eight years have been in the banking sector including Standard Chartered and Arab Bank. The last position he carried at Arab Bank was Head of Credit Cards Development for Levant, Middle East and North Africa.